Derek Trueman has lived in Singapore, on and off, since 1989 and he taught at Victoria J. C. and Anderson J. C. He joined the choir in 2016 and loves to sing hymns. He is now happily “retired.”

Where Do Our Hymns Come From?

The use of hymns (from the Greek word ‘hymnos’ meaning ‘songs of praise’) stretches right back to the early days of civilisation. Their use has been discovered in many parts of the ancient world, for instance, those written by the Pharoahs, by Hindus and by the 7th century BC Greeks – a collection of 33 hymns to different gods attributed to Homer.

The New Testament of The Bible tells us that hymns were sung by Jesus and the Disciples (Matthew 26:30), but little else is known about their development for the first three centuries of the Church, although it is clear they were modelled on the psalms and canticles of the Scriptures.

Songs were also written with familiar folk rhyme and rhythm which were easy to sing and memorize.

However, starting from the 4th and 5th centuries there are records of hymns being sung in Catholic churches. In the 6th century Benedict of Nursia (480-547), founder of the Benedictine Order of Monks, translated many of them into Latin and formatted them into Gregorian Chants or plainsong. With few exceptions, these hymns, sung primarily by monks, remained the accepted Christian church music for hundreds of years thereafter. In Medieval times they would be sung to harp, lyre and lute but no musical notations remain. Later, the Church introduced four-part vocal harmony as the norm for congregations, adopting major and minor keys, and they were led by the organ and choir, yet conversely today congregations tend to sing solely in unison.

In the early 16th century, the Protestant Reformation brought about many changes, including hymns being translated from Greek and Latin into languages that ordinary congregations could understand. Songs were also written with familiar folk rhyme and rhythm which were easy to sing and memorise. In England, the Church determined to adapt all their new hymns from the Holy Scriptures, primarily the Psalms. In Germany, Martin Luther (1483-1546) created songs based on scriptural principle but not taken directly from the Scriptures. The most famous of his hymns, A Mighty Fortress is Our God lives on in hymnals today.

However, there was an alternative attitude to hymnody favoured by Calvinists and Zwinglians, which rejected any hymn that was not a direct quotation from the Bible. Any other hymns with musical accompaniment were also banned, causing organs to be ripped out of churches. Instead, Psalms were chanted to simple melodies, and even today this practice can still be found, for instance in some Presbyterian churches of western Scotland.

The first Protestant hymnal was published in Bohemia in 1532 by the Unitas Fratrum (The Moravian Church). Later, Count Zinzendorf, a Lutheran leader of the 18th century, wrote some 2,000 hymns, of which the most famous is Jesus, Still Lead On. 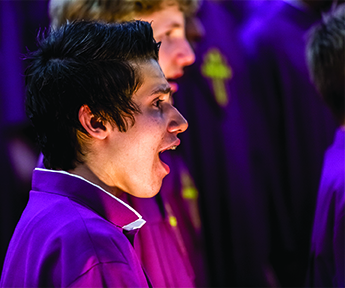 The earlier English writers tended to paraphrase biblical texts, particularly the Psalms. Isaac Watts (1674-1748), the founder and liberator of English hymnody, followed this to a point, but he is also credited as having written the first English hymn which was not a direct paraphrase of Scripture. He was instrumental in motivating England to expand its hymn base when he wrote and distributed such beautiful hymns as When I Survey the Wondrous Cross and Joy to the World.

In the early 18th century Charles Wesley took hymns to another level altogether. He wrote and published more than 6,500 hymns designed to appeal to the personal emotions and salvation experience of the Christian. O For A Thousand Tongues to Sing, Hark the Herold Angels Sing, Christ the Lord Is Risen Today, and others quickly became popular first within the Methodist church and then within other denominations. Even today there are still 150 of Wesley’s hymns in the Methodist hymn book. Thus the song styles of Watts and Wesley form the foundation of contemporary Christian music. Their words and melodies still ring true today and are loved in many churches around the world.

emerging in the early 19th century were the Gospel Music hymns such as Blessed Assurance by Fanny Crosby. Fanny, who was blind, wrote more than 8,000 songs!In the 19th century, the passing of the Catholic Emancipation Act opened the door for hymns other than the Latin Gregorian Chants to be written and sung in Catholic churches. In order to make this change while still staying true to their unique Catholic worship style, an entirely new group of hymns came to life, including the popular To Jesus Christ Our Sovereign King, Holy God We Praise Thy Name, and Come Holy Ghost.

Also emerging in the early 19th century were the Gospel Music hymns such as I Love to Tell the Story by William Fischer and Blessed Assurance by Fanny Crosby. Fanny, who was blind, wrote more than 8,000 songs! This style of music became popular during the great revival camp meeting days of such evangelists as Dwight D. Moody.

In the early 20th century the Pentecostal movement determined to bridge the gap between Christians of different races. One such instance was the 1906 Azusa Street Revival which allowed Black gospel hymns and musicians to start gaining popularity with White believers.  Precious Lord written by Thomas Dorsey and His Eye is on the Sparrow (author unknown), both sung by the great Mahalia Jackson, are examples of a distinctive musical style that crossed racial lines.

The Jesus People movement of the late 1960s and early 1970s introduced new ideas about church propriety and fresh new hymns to the Church. Songs such as Easter Song by Second Chapter of Acts, Alleluia by Chuck Girard, Lord, You’re Beautiful by Keith Green and The Blood Will Never Lose Its Power by Andre Crouch were first appreciated by the younger generation and then over time adapted into mainstream church society. ‘Praise and Worship’ services within the Church have taken on a new populist sound over the past 40-plus years with composer lyricists like Graham Kendrick (Shine, Jesus, Shine) and Stuart Townsend (In Christ Alone) to the fore.

In the 1970s and 1980s, Integrity Music and Maranatha! Music introduced the Church to As the Deer Pants for the Water, You Are My Hiding Place, and many other hymns designed to take corporate and private worship to a new level of intimacy with God, often replacing “you” or “we” with “I” in the lyrics. Hymns of praise began to emerge regularly from popular and obscure Christian musicians around the world.

The introduction of the Internet in the 1990s then made it possible for Christians to see and hear praise and worship from across the continents, bringing this breadth of devotion into peoples’ own living rooms. Evangelical churches quickly introduced worship bands for young people, playing catchy if repetitive religious rock songs and the singer(s) would often take over many of the duties of the church minister and lead the service. Today Hillsong and Bethel Music have become household names through their own weekly services in the UK and USA, as well as via Spotify, YouTube, and gig tours around the world.

Certainly, these modern religious songs are not traditional hymns as the Church knows them, and they have faced criticism from a number of corners, but their aim is essentially no different to hymns: to call people to God and to gather congregations together to worship His name, especially from youths and young adults. And so, in conclusion, as this younger generation matures apace, who is to say it will not take forward such songs as its worshipping norm, slowly but surely relegating the traditional hymns to the dusty bookshelves of History? Perhaps the only hope will be compromise.

Derek Trueman has lived in Singapore, on and off, since 1989 and he taught at Victoria J. C. and Anderson J. C. He joined the choir in 2016 and loves to sing hymns. He is now happily “retired.”