The Ministry Of Change Ringing

2019 is a year of blessings - it is a year that celebrates hope in many ways. In the year that Singapore commemorates the bicentennial anniversary of its founding by Sir Stamford Raffles, the eight bell apostles of 1889 return home to St Andrew’s Cathedral. They return to their fundamental mission – to breathe life into the city and remind anyone who hears their call that God is here.

The eight bells were taken down in December 2018 and shipped to Loughborough, UK, for restoration. The old clappers and frame supports were also sent to Loughborough, melted down, and used to cast new headstocks for the bells.  The eight bells returned in June 2019, accompanied by five new bells. Each of the bells bears the name of one of the apostles of Christ. The largest bell is the Andrew bell which weighs 1297 kg, while the smallest is the Simon bell which weighs 198.5 kg.

St Andrew’s bell tower is being renovated and fitted out to take in all the bells. The bells will be installed for both chiming and change ringing. Change ringing is a tradition of the English church, but one that has been adopted by some other denominations and even for secular rings. It is a method of ringing tuned bells by controlling the speed in which the bells are rung to produce variations in their striking sequences. This will be the first time that St Andrew’s bells are rung by swinging them through an arc of 360 degrees or more to produce a cascade of complex and majestic sounds. This will be the first change-ringing peal in Singapore.

The bells are tuned to a diatonic major scale. The bells numbered ‘6’ and ‘6♭’ are pitched to C sharp and C, respectively. This additional bell allows subsets of the full number to be rung within the diatonic scale. For example, bell ringers can produce a light diatonic octave with eight bells if they ring Bell 2 to Bell 9 using Bell 6♭. This combination of eight smaller bells of the peal which when rung, produces higher notes and the lightest ring, is also called the Front Eight (see Table). 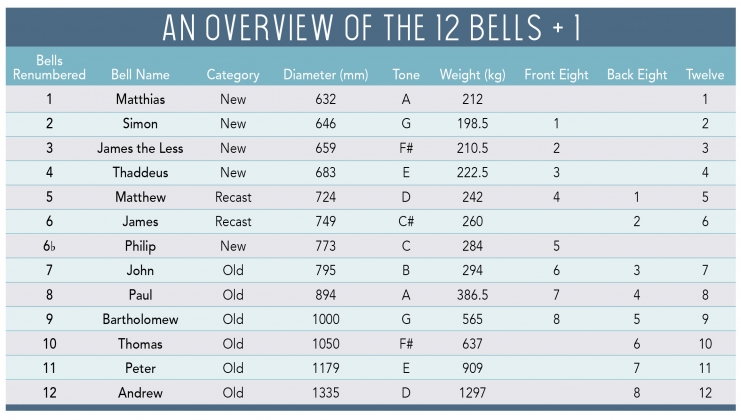 The process of ringing the bells in sequence repeatedly from the highest note to the lowest note (i.e. by pulling on the lightest bell to the heaviest bell) is called ringing rounds. For change ringing, a minimum of four bells must be rung. The more bells that are rung, the more complex - and majestic - the sound.

Change ringing is believed to have originated in the mid-17th Century.  When ringing the bells, ringers will stand in a circle facing one another and pull the bell ropes. Since change ringing is based on patterns, it has also been referred to as a mathematical art. There is no score sheet in change ringing. In a form of change ringing called Method ringing, bell ringers are each assigned a bell and they learn the path that their bell makes through the sequence and memorise it. Bell ringers will plot their course ahead of time. After a command from the bell conductor, bell ringers ring the agreed path from memory. This is how St Andrew’s Cathedral bells will be rung.

Benjamin and Andrew are looking for bell ringers to join the ministry. They hope to recruit members from different services and of different ages who are passionate about bells and enjoy working as a team. Bell ringers should be relatively fit so that they can climb up the bell tower and ring the bells continuously for a period of time. Preferably, they should also have a sense of rhythm and good memory since change ringing involves changing a set of ring sequences. If you share Benjamin’s and Andrew’s passion for church bells and find a sense of calling for this ministry, email bellringingministry@cathedral.org.sg to find out more.

Benjamin Tai
“As a server, I started ringing for the Christmas Eve Service about 10 years ago. I do not have any background in change bell ringing per se - I will be starting from scratch.

There are currently six of us in the bell ringing committee, but none have been trained so far in change bell ringing. In terms of profession, we are rather diverse. However, all have some music background of sorts. We will need at least 2 or 3 more members to form the ﬁrst team of 8. The actual ringing of the bell can be picked up quite easily, but ringing as a team would require more time. 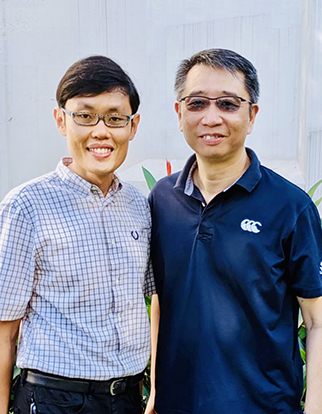 If there are members who are interested and dedicated to being a part of this ministry, it would be another aspect of community life in the Cathedral where members come together to glorify God. Traditionally, church bell ringing groups train weekly. We have not fixed the details yet because we are all new to change bell ringing and are still learning. Ideally, bell ringers should commit to at least 2 years in the ministry. This is because it takes time to train the person, and it is important that the bell ringers stay together as a team since change bell ringing is pretty much a team effort. Change bell ringing is all about teamwork and learning from each other.

For anyone who is interested in this ministry, do come and give it a try and be ready for a full body workout. But seriously, I would say that in everything we do, we do it wholeheartedly and only to the Glory of God. Let us “Make a joyful noise to the Lord… Serve the Lord with gladness!” (Ps 100:1-2a)”

Andrew Ang
“My interest in the bells at the Cathedral was first sparked by my wife Valerie, who has a keen interest in the history of our church building and its importance as a beacon for locals and tourists. That a Revere Bell had long ago been cast and used for a time in what had been St Andrew’s Church, was a little-known fact that she shared with me. Even then, the effective use of that one bell underscored the important role of bells in regularly marking a time of day or an occasion of note.

When it became known that the Cathedral was embarking on a plan to restore and add to its existing peal of bells, and more importantly enhancing their ringing capability, like many others, I was excited.

Whilst the bell ringers will work out of sight, their work will be heard through the precinct and on occasion across the land. For a start, I think the plan is to try to train a batch of eight ringers and build up over time. I suspect that ringers will have to dedicate a number of hours each week, at least at the start, in order to learn the techniques and intricacies of bell ringing. Learning from scratch with others should be a lot of fun!

We will have to get to know our bells better after they are installed. As a complete novice myself, I have to say that the prospect is exciting. The ringers may need some months to build up knowledge and confidence, but I hope that bell ringing will become a regular occurrence, and a meaningful one, by Christmas and the New Year.”

Do Not Judge Others (9:30am Service)
|  22 Jan
Revd Joshua Raj shares at the Sunday Service