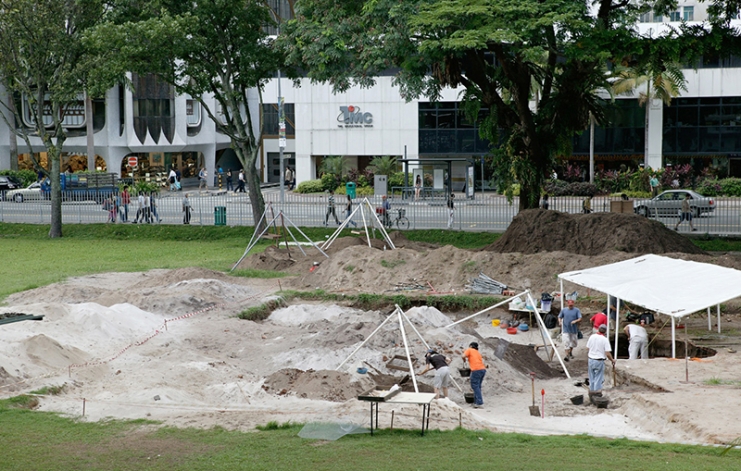 An archaeological excavation in progress at St Andrew’s Cathedral – the team noted a layer of white sand, which was mentioned in the Sejarah Melayu (Malay Annals). It was written that it was the island’s white sand that drew the attention of Sang Nila Utama, the mythical founder of Singapura in the 14th century.

From an archaeological perspective, St. Andrew’s Cathedral lies in an interesting part of Singapore. It was not close to the Singapore River or the beach, but situated right next to the Freshwater Stream and the Old Malay Wall, an earthen rampart that formed the north-eastern boundary of the city. The Malay Wall was levelled in 1828 to build Stamford Road, while the Freshwater Stream was converted into the Stamford Canal and covered in the 1970s. 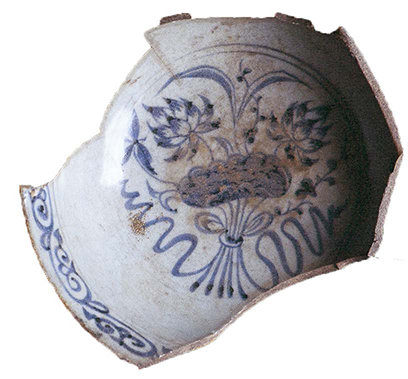 Previous archaeological excavations conducted since 1984 showed that the bank of the Singapore River was used for different purposes, such as loading and unloading ships, working copper and iron, a market, and warehouses for goods. Fort Canning Hill was the palace area with religious structures made of brick. It was also the site where artisans made jewellery of glass and gold.

The purpose of these archaeological excavations was to uncover as many sites as possible, so as to study the allocation of space in pre-colonial Singapore. Each site would have its own range of artefacts and used for a specific purpose by different ethnic groups, occupations and foreign trading partners. Therefore, it was expected that the grounds of St Andrew’s Cathedral would have a different use compared to the sites at Singapore River and Fort Canning Hill. Conducting an excavation on the Cathedral’s grounds presented a unique opportunity to gain a different view of pre-colonial Singapore.

In 2003, archaeologist Professor John Miksic was informed by Associate Professor Albert Lau of the National University of Singapore (NUS)’s Department of History about the Cathedral’s plans to construct an underground extension. With Associate Professor Albert Lau’s assistance, contact was made with the Very Revd Dr John Tay Sin Hock, Dean of St Andrew’s Cathedral. A committee consisting of NUS and National Museum staff met with the Cathedral’s board, and informed the Preservation of Monuments Board of the planned excavation. 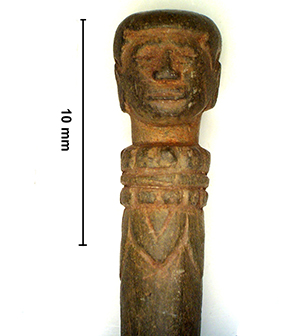 Stone peg, which dates from the 14th century or earlier. Similar items have been found in Kedah and North Sumatra, and it may have been used as a touchstone for assaying gold.

After reviewing historical records and discussions with government agencies, a team led by Professor Miksic took soil samples to shortlist which locations on the Cathedral’s grounds held the greatest potential to yield pre-colonial artefacts. The team later decided to focus on an area of 240 square meters where the Cathedral had plans to build the underground extension.

The archaeological excavation at St Andrew’s Cathedral was a seven-month-long project from 16 September 2003 to the end of March 2004.

According to the Hikayat Abdullah (Stories of Abdullah) — one of the earliest Malay texts which serve as an important historical record of Singapore’s socio-political landscape at the turn of the 19th century — about 30 European houses stood on the Cathedral’s grounds in 1824. This corroborated with the team’s findings of artefacts from the 19th century. The team found pieces of glass and slate roof tiles from the church, and World War II relics such as rifle bullets, which had to be handed over to the police.

The team was able to collaborate with many schools, which gave many students the chance to experience archaeology and to feel the thrill of discovering artefacts. Many members from the public also stepped up to volunteer at the site. 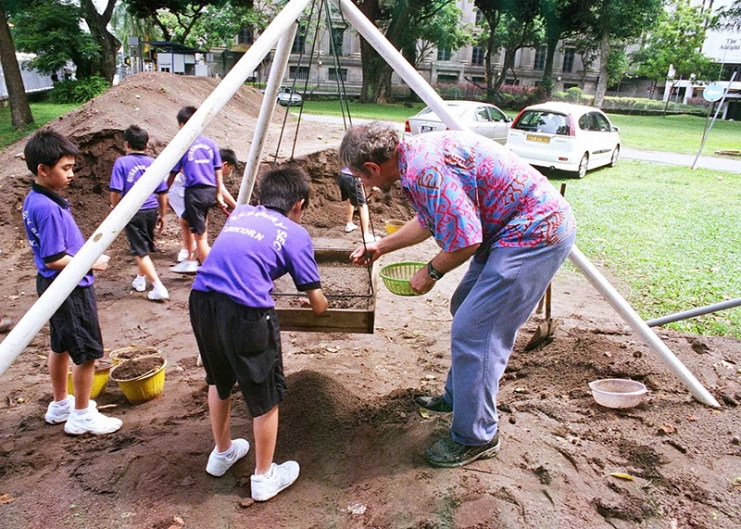 At the end of the project, almost one tonne of artefacts (1000 kg) was excavated from the Cathedral land. The most common artefacts encountered by the team during the excavation were pieces of fourteenth-century Malay pottery, Chinese stoneware jars, and Chinese porcelain bowls of the Yuan Dynasty (1260-1367). The team also found coins from China and Sri Lanka. 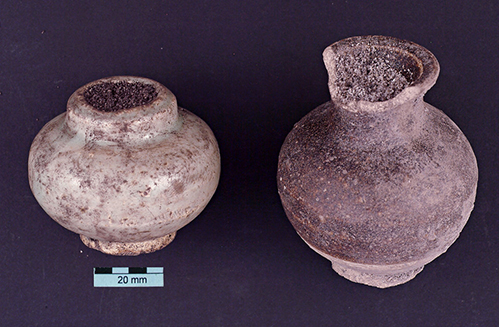 Intact 14th century Chinese jarlets made in southern China. The one on the left is made of light green porcelain, while the one on the right is a brown-glazed stoneware.

Other fascinating discoveries include three intact Chinese jars. These were the first unbroken fourteenth-century artefacts discovered in archaeological excavations in Singapore. However, there was nothing found inside the jars and the team is unable to determine who buried them and the reason why they are buried.

Another significant discovery by the team was a carved piece of stone with a human head at one end. This may have been a touchstone for measuring the purity of gold. A piece of gold wire and a simple gold ring were also found by the team. This suggests that there were groups in pre-colonial Singapore who were wealthy enough to own gold. It was also possible that goldsmiths worked in the area.

Since 2004, volunteers and students have been helping to clean, sort, and classify the artefacts from St. Andrew’s Cathedral. A preliminary report on all the excavations in Singapore was published in 2013 by NUS Press in John Miksic’s Singapore & the Silk Road of the Sea, 1300-1800. The artefacts excavated from the grounds of St Andrew’s Cathedral form a very important source of information which can help to reconstruct life in pre-colonial Singapore. Research on this collection will occupy scholars from Singapore and other countries for many years to come.

This article was originally published in the December Bicentennial 2019 issue of the Courier.