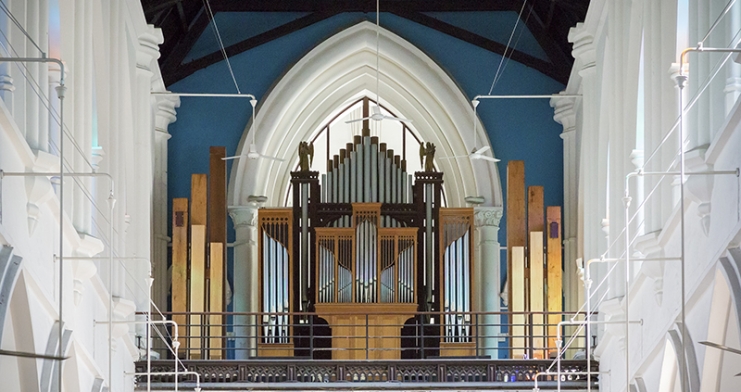 A beautiful picture hangs above the West porch of the Nave - twelve wooden columns stand quietly on both sides of metal organ pipes, guarding them, waiting patiently to speak at a command from the chancel. These twelve columns are a combination of restored and new wooden organ pipes that were installed in May 2019, together with a new chancel organ for the Nave. Within this tight space perched above the West entrance, old meets new – pipes of different ages and materials come together to worship, to proclaim God’s grace to the Cathedral, the people and the city.

The tallest and darkest pipe is made of teak and dates back to 1929. This was the only wooden pipe conserved from the Hill, Norman & Beard 3 manual+pedal organ. The light brown pipes are conserved from the 1861 John Walker 2 manual+pedal organ, the first organ for the current Cathedral building. These light brown pipes are made from Quebec Yellow Pine. The lightest colour pipes are the newest addition to the Cathedral, and are also made from Quebec Yellow Pine. Their wood was chosen to match the wood of the 1861 pipes. The newer Quebec Yellow Pine pipes are lighter in colour because new wood is paler than old wood, even if they are from the same species of tree. With time, the new wood will darken and gradually become closer in hue to the 160-year-old Quebec Yellow Pine pipes. The colour of the 1861 pipes has stabilised and will not turn any darker.

The glistening metal organ pipes that are most visible in the West Gallery were installed in 2009. This organ casing contains 459 pipes of which 415 were repaired pipes from the 1959 Walker organ. The newer pipes are bright and shiny while the older ones are grey or painted dark red. Directly behind these pipes and partially hidden in the background are the disused front pipes from the 1959 organ. These were kept intact to preserve the importance of the organ’s purpose in the history of the Cathedral.

Old Pipes, New Pipes and a Modified Organ
The restoration of 600 pipes was started in 2017 to conserve the Cathedral’s musical heritage and improve the grandeur of organ music for worship. Organ music has been part of the Cathedral’s music ministry from the first church (see timeline “Brief History of Organs in the Nave) when a 3-stop barrel organ with around 120 pipes was installed in the first St Andrew’s Church.

The current Nave organ was first a Rodgers Trillium Masterpiece Model 1058 electronic (4 manual+pedal) organ that was installed in 2005. This was converted into a combination organ in 2009 when 415 pipes from the 1959 Walker organ were restored and connected to the Rodgers console. Previously, this console was connected to the pipes and speakers in the West Gallery, which meant that when music was played from this organ, all the sound came from that location.

Today, this same organ has been reconfigured to include a new chancel organ – adding a Choir division which allows pipes to speak from the South Vestry into the chancel to accompany the choir, with the Great (with pipes), Swell and Solo divisions that speak from the West Gallery to lead the congregation. The Choir division is played on the bottom manual of the (4 manual+pedal) organ console.

A new expression box containing the restored organ pipes was installed in the space above the South vestry, just opposite from the organ console. On the outside of the expression box, five new metal pipes were placed in each of the left and right windows decorated by display cases made of oak. Two sets of conserved pipes from the 1861 and 1929 organs were placed one above the other, separated by a large St Andrew’s cross in the centre window, with the lines of the cross continuing through the pipes’ mouths and wooden screen in the left and right cases. Playing on the bottom manual of the organ console now makes the pipes speak from the expression box in the South Vestry instead of the West Gallery. Some of the stops in the organ are pipes while others are electronic, all connected to either the South Vestry or West Gallery.

For the first time in the history of organs in the Nave, music from the pipes located in the West Gallery and South Vestry are played from the same console. This was a tension that remained unresolved for decades because of the geographical limitation of the organ console and technical difficulties until technology and clever design made this possible today. Previous organ designs required the console to be located close to the pipes because the mechanism that controls which pipes speak had a limited length. This made leading the congregation and accompanying the choir challenging, especially within the interior of the Nave.

For example, if the choir was singing in the chancel, then the organ should speak from there as well. If it was speaking from the back, then the congregation at the back would find it too loud compared to the choir and the people in front would find it too quiet. Also, it takes a quarter of a second for the sound to travel from the back to the front. This would mean the choir would start singing a quarter of a second after the organ and the congregation at the back would hear the choir sing half a second later.

With this design, it is now easier to accompany the pastor or choir using the chancel organ, and lead the congregation in response using the gallery organ, all controlled from the same console. The sound of the organ and choir come from the same section of the church and travel in unison to fill the nave. It also gives the congregation confidence in singing.

The new Nave organ, in its current design with old and new, was played for the first time on 2 June 2019. It was commissioned together with the restored (and new!) bells at the 5 PM Service on 11 August.

“Where shall we be in one hundred years from now?” – says a graffiti phrase inscribed in 1959 on one of the 1861 Walker pipes. By grace, we have been blessed by more than 150 years of organ music in the history of the Cathedral. By grace, we will be blessed by the music ministry from this remarkable instrument for a hundred more.

“What’s in a Name?”
An organ can be identified by the name of its manufacturer, the venue where it sits, the location of the pipes, or by its divisions (e.g. Great, Swell, Choir, Solo). The rich and complex heritage of this 2019 Nave organ makes it difficult to give it a name that fully captures the character of this instrument. How can we refer to this 2019 organ, which is a combination of metal and wood pipes made at different time periods, controlled from a 4 manual+pedal console located in the Chancel but digitally connected to speak from speakers and pipes located in the West Gallery and South Vestry? Today’s version of the organ can simply be called the 2019 Nave organ at St Andrew’s Cathedral. Shakespeare had asked: ”What’s in a name?” Ultimately, it is our words that define who we are.