Keith Leong completed his Master of Studies in Science and Religion at the University of Oxford recently. He is a member of St Andrew’s Cathedral.

Reflections on the Galileo Affair 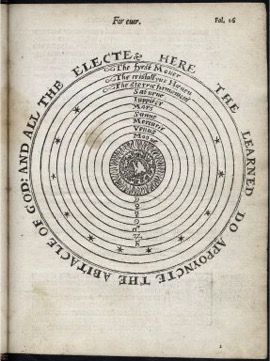 Source: Folger Shakespeare Library.
Leonard Digges. A prognostication everlasting. London, 1556. A depiction of the Christianized Aristotelian Cosmos, versions of which were held by many of Galileo’s contemporaries.

The charge and arrest of Galileo Galilei for “vehement suspicion of heresy” because he had proposed and defended a sun-centered model of the universe despite being told not to has been commonly cited as an embarrassing example, par excellence, ofthe inevitable conflict between forward-looking science and obscurantist religion.

A simple Google search of the “Galileo affair [or] controversy” yields a deluge of articles that have used this episode as an anchor point for defending or castigating the Catholic Church or religion’s relationship with science. In my own studies on the historical reconstructions of this affair, differences of opinion concerning what the conflict was predominantly between (that is, science and religious authority, science and approved scriptural interpretation, science and science, changing Church sympathies toward or against Galileo, and so on) also abound in the literature.

In this article, I wish to offer a recounting of this episode, not in order to settle the above debate about what the conflict was really about; that would be overly-ambitious, and, at any rate, impossible to justify in a few paragraphs; but in order to relate its complexities, and the corresponding impossibility of drawing easy conclusions concerning the Catholic Church’s relationship with science at the time.

Having done so, I then hope to sketch out some lessons the episode can offer us concerning the relation between faith and science. Let us begin with a brief description of the affair.

Galileo was a prolific scientist who lived in the 16th and 17th centuries and made seminal contributions to physics, engineering, and astronomy. With the creation of a superior telescope, his corresponding astronomical observations led him to favour the physical reality of a sun-centered Copernican model of the universe, whose mathematical calculations he had already favoured beforehand (the Church had previously accepted the Copernican model insofar as it was a useful predictive mathematical tool that did not otherwise assert that the sun must actually be at the center of the universe). This model differed from the earth-centered model of the universe based on an “Aristotelian physics” that the Catholic Church and many scientists accepted at the time.

Aristotelian physics conceived of reality as made up of five elements, four of which consist of base, or inferior material which tended to the center of the universe, that is, earth, which was unmoving (coincidentally, this fact dissolves the common belief that the earth-centered model was erected on the Church’s assertion that the earth and its inhabitants had to be at the center of the universe because they were somehow special). The fifth element, quintessence, an incorruptible and unchanging material, was what made the heavenly bodies, that is, the sun, the moon, and other planets, and determined that they revolve around the earth in perfect circles for eternity (see image above).

He published these findings in 1610 and 1613, indicating his inclination toward Copernican astronomy. This led to the Inquisition, or Holy Office – the office charged with ensuring orthodoxy – declaring the implications of these findings false, and the Cardinal Robert Bellarmine in 1616 telling Galileo not to defend the model. Many scientists disagreed with Galileo as well. They argued, rightly, that the Copernican model could not yield superior predictions to the earth-centered model, since both assumed circular rather than elliptical orbits; and, wrongly – because they did not have powerful enough measurement equipment at the time – that stellar parallax, which should be observable if the earth was moving, could not in fact be observed.

However, in 1613 and 1615, Galileo had already sent out widely circulated letters to his disciple Benedetto Castelli and the Grand Duchess Christina defending the Copernican model on scriptural grounds.

In the letters, he relied heavily on the interpretive principles of the Church Fathers, especially Saint Augustine’s concept of “accommodation,” that is, the idea that the scriptures have been written to accommodate the mind of the common person so as to give priority and clarity to matters pertaining to salvation, and not to scientifically robust descriptions of reality. He provided the metaphorical anthropomorphisms of God as examples.

The verses in the scriptures which had been appealed to in support of the Aristotelian earth-centered model include Joshua 10.13, Psalm 19.4-6; 93:1; 96.10; 104:5; 119.90; Ecclesiastes 1:5 and I Chronicles 16.30. Galileo argued that “accommodation” was required to understand these passages. Concerning the Joshua narrative specifically, Galileo also argued that Joshua’s command to stop the sun from moving can be better interpreted as a command to halt the sun’s stationary rotation, such that the whole universe would come to a halt, since he believed, wrongly, that the sun’s rotation drove planetary movement.

Unfortunately, by appealing to scriptural interpretation, he was treading on thin ice. The Catholic Church had been embroiled in theological and political conflict with the Protestant Reformers for some time, and had declared at the Council of Trent in 1545-63 that “no one, relying on his own judgment and distorting the Sacred Scriptures according to his own conceptions, shall dare to interpret them contrary to that sense which Holy Mother Church, to whom it belongs to judge their true sense and meaning, had held and does hold.”

Thankfully, Pope Urban VIII, who was a long-time admirer of Galileo’s work, told him in 1624 that he could discuss Copernican theory but only as one hypothesis among others. This emboldened him to publish his Dialogue Concerning the Two Chief World Systems in 1632, wherein he, rather unwisely, promoted Copernican theory through a fictional dialogue between three individuals who held different cosmological views, and gave the name Simplicio (which means simple-minded) to the advocate of the Aristotelian earth-centered position, a position which the Pope personally favoured.

In other words, Galileo seemed to be subtly telling the Pope that he was simple-minded. As one might imagine, the Pope did not take this lightly. He was at the time embroiled in the Thirty-Years’ War, had just switched his allegiance from the French to the Spanish and felt that he needed to come down strong on Galileo to show his new allies his authority and decisiveness. In addition, Galileo’s good friend and supporter Giovanni Ciampoli, the papal favourite who helped him remain surprisingly well-regarded in ecclesiastical circles, fell from grace in the Spring of 1632, leaving Galileo unsupported and vulnerable to discrediting accusations.

As a result, in 1633, he was summoned to the Holy Office and found guilty of vehement suspicion of heresy. He was ordered to publicly recant his Copernicanism, commit to three years of weekly Psalm recitations, and be confined to his home in Florence where he remained until his death in 1642.

As one might expect, a century later, the Church began the gradual process of openly shifting their stance toward Galileo. In 1744, Galileo’s Dialogue was republished with the Church’s approval. In 1893, Pope Leo XIII advanced a view concerning the relationship between scripture and science in his encyclical that was similar to Galileo’s. Between 1941 and 1946, several academic clergymen occasioned a partial and informal rehabilitation of Galileo in their published work. And in 1979, Pope John Paul II began a further informal rehabilitation of Galileo. In his 1992 speech, he declared with some finality that “the new science, with its methods and the freedom of research that they implied, obliged theologians to examine their own criteria of scriptural interpretation. Most of them did not know how to do so. Paradoxically, Galileo, a sincere believer, showed himself to be more perceptive in this regard than the theologians who opposed him.”

From this short description of the Galileo affair, we can see that one cannot interpret the event simply as a conflict between science and religion. In order to begin to make sense of its complexity, the minimum factors that have to be taken into account include the legitimate scientific disagreement among scientists toward Copernicanism on observational and mathematical grounds, the context of the Catholic Church’s debacle with Protestantism and the corresponding challenge to their authority, the cultural assumptions and intellectual authorities of the age, that is, Aristotelian teleological physics as opposed to Galileo’s very different commitment to the primacy of mathematics and observation, Urban VIII’s own political troubles, and Galileo’s unwise jab at him.

So what lessons can we take away from this episode? We can learn that the relationship between scripture and the deliverances of modern science is not a straightforward one. This opens us up to being skeptical but not antagonistic toward scientific pronouncements that, on the surface, seem to conflict with scripture. We can also learn to appreciate the different kinds of literary genres in the scriptures and value their theological import without necessarily committing ourselves to their corresponding physical descriptions of nature.

Finally, we can learn that science and religion do not necessarily have to be in conflict. Our embodied, finite nature, and the corresponding limitations of our scientific and religious inquiries (see Job 38-42 and I Corinthians 13:1-12) means that we are not always going to be right or find the most accurate answers and solutions to the questions and problems that we encounter. But it does not follow that these answers do not exist, or that there are no solutions to these problems. An apt aphorism may be recalled here: The opposite of faith is not doubt; the opposite of faith is certainty (see Hebrews 11). If we are called to live by faith, then accepting that there may be questions we do not have certain answers for, or that we may be wrong about some of our beliefs sometimes, is to do no damage to it.

At any rate, there are professional historians, scientists and theologians who work tirelessly in the area of science and religion, who have offered solutions to just about any question we could ask, some of whose works and resources I have listed below.

Author: Keith Leong completed his Master of Studies in Science and Religion at the University of Oxford recently. He is a member of St Andrew’s Cathedral.

Maurice Finocchiaro, “The Copernican Revolution and the Galileo Affair,” in The Blackwell Companion to Science and Christianity

On Science and Religion

Peter Harrison, The Territories of Science and Religion

On the Theory of Evolution

Keith Leong completed his Master of Studies in Science and Religion at the University of Oxford recently. He is a member of St Andrew’s Cathedral.