Graham White: A Legacy of Faith

In the hustle and bustle of Sunday mornings, hundreds of church faithfuls flock to the Nave to make it in time for services at St. Andrew’s Cathedral. As many would quickly pass by the North Transept Hall located next to the Nave, it is easy to overlook the historical significance of the space which houses the Graham White Library that was completed in 1952. In this article, we delve deeper into the person that the library was named after and explore why the Cathedral chose to honour Graham White in such a manner, along with the legacy that he left behind for the Anglican Church in Singapore. 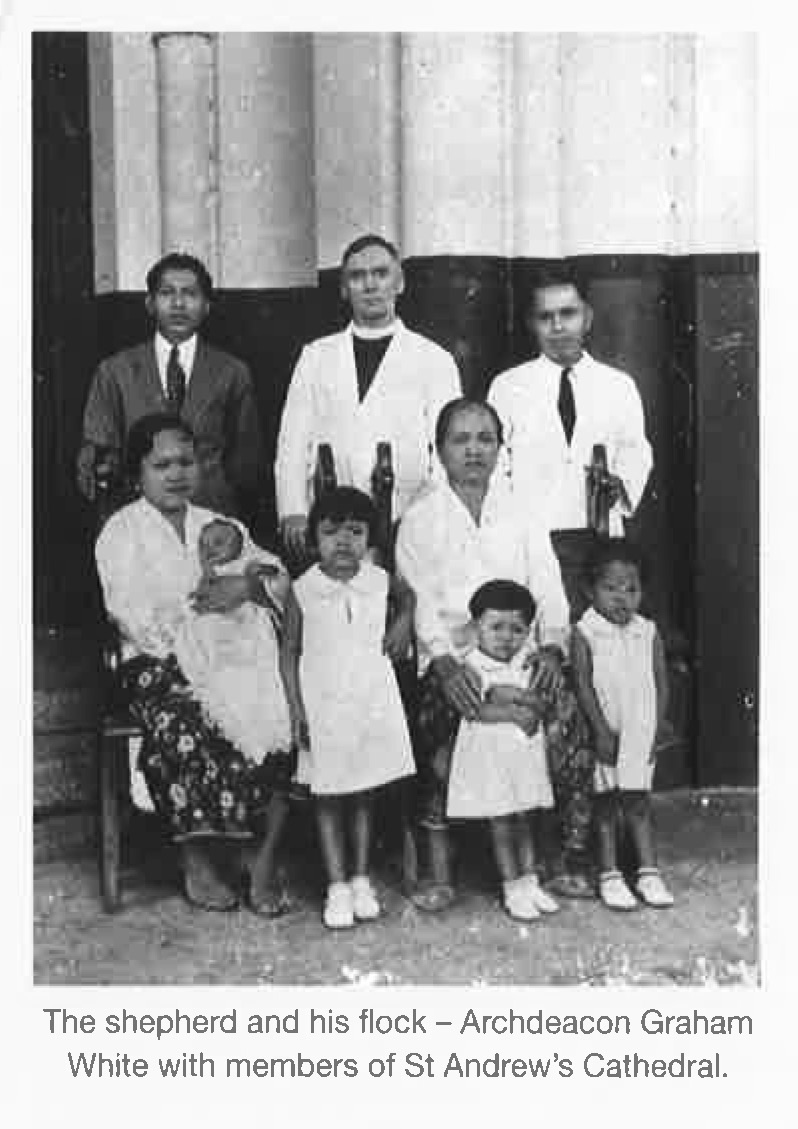 Educated at University College, Oxford, Graham White first came to the region in 1925, when he was instituted as Chaplain of South Perak. Before his posting to British Malaya, White was Vicar at the Church of St. Hilda and St. Helen from 1920 to 1925, where he served the coal mining community in the township of Dawdon, northeast England. After 6 years in Perak, White was installed as Archdeacon of Singapore on 21 June 1931, at an Evensong service at St Andrew’s Cathedral.

During White’s tenure as Archdeacon, Singapore faced a period of economic uncertainty as the effects of the worldwide Great Depression were also felt in this part of the world. The fall in demand for commodities such as tin and rubber affected trade and had a negative impact on businesses, wages and employment. As Archdeacon, White felt that more could be done for the welfare of the local people and understood the importance of reaching out beyond the four walls of the Cathedral.

He played an instrumental role in setting up two churches on the outskirts of the city, so that the Church could remain accessible to those who may not have had the financial capacity to travel from rural outlying communities to the city where the Cathedral is located. With this vision in mind, White played an instrumental role in establishing two churches in the 1930s: St. Paul’s Church in Upper Serangoon and St. Hilda’s Church in Katong. White was extensively involved in the foundation of St Hilda’s Church and School. In a strong act of faith, he dipped into his own personal savings to purchase the plot of land at 41 Ceylon Road so as to secure a long-term future for the church and school.

THE FALL OF SINGAPORE
The peaceful years did not last long, as World War II dawned upon Singapore with the December 1941 Japanese attacks on Pearl Harbour and Southeast Asia. While most locals assumed the Japanese would not attack due to the strong British military presence, the Japanese launched their first daytime raids in Singapore in January 1942, thus marking the beginning of the Japanese invasion of Malaya.

The Japanese raids affected Archdeacon White personally, with the death of his own secretary Joseph who was killed instantaneously when the bombs fell as he was standing on the verandah of White’s garden. Despite this tragic event at the Cathedral House, White continued to press on and minister to the people. Together with his wife Georgina, they went to places where help was needed the most such as the General Hospital which faced an increasing number of casualties from the heavy bombing raids. In addition to arranging for Sunday Services at the Cathedral, White went around hospital wards to meet with wounded soldiers and civilians while his wife continued her work with the Red Cross.

The “Gibraltar of the East,” as Singapore was known then, finally fell on 15 February 1942, and the Whites soon found themselves interned as Prisoners of War (POW) with other British and European civilians. By God’s grace, the incoming Japanese Officer in charge of Religious Affairs was a member of the Nippon Sei Ko Kai, the Anglican Church of Japan.

Lieutenant Andrew Tokuji Ogawa was sympathetic towards the plight of the Church during the war years and maintained cordial relations with the Anglican clergy. Ogawa helped to secure the release of three clergymen from internment. On 22 February, Bishop Wilson, the Bishop of Singapore received passes for himself and two others to move at will around Singapore and have use of two cars. Holding a senior position in the Diocese, Archdeacon White was also offered the same pass to roam free in occupied Singapore. However, he was aware that he was not in the best of health and chose to sacrifice his freedom so that younger clergy could best attend to the needs of the Church during the war years. Archdeacon White would have known that his decision would result in his confinement as a Prisoner of War in the Changi Prison. In spite of these tribulations, White and his wife played an important role in raising morale and ministering to the spiritual needs of the interned. In addition to preaching at services, White sought to maintain some form of church routine in camp by holding classes for Confirmation candidates, prospective ordinands and New Testament Bible study groups. Perhaps taking comfort and inspiration, he also conducted a special study of St. Paul the Apostle who was imprisoned for preaching Christ’s gospel.

In May 1944, both husband and wife were moved from Changi to another prison camp at Sime Road intended for civilians. However, they struggled with frail health during their internment—food was scarce while the overcrowded camps had poor standards of hygiene with little medical treatment available for the multiple cases of diarrhoea and dysentery.

Georgina White passed away in January 1945. Her loss was felt keenly at the Women’s Camp as she was a pillar of support for those around her. A few months after his wife’s passing, Graham White underwent an operation and died less than a week later on 8 May 1945, at the age of 61, from bronchial troubles and a sudden attack of diarrhoea which took away his strength. Bishop Wilson was by the Archdeacon’s side at his passing and a memorial service was held in Camp which remembered his generous nature and services to education.

A MAN OF FAITH
However, not all was lost with this man of faith. In his last days at Sime Road Camp, Archdeacon White executed the declaration of trust in the presence of two English solicitors. This 17-page legal document included a title deed for 41 Ceylon Road, which Graham White dedicated for the purpose of an Anglican church or school for children of all races and creeds whether Christian or non-Christian. Even in a weakened physical state, the welfare and future of the church that he founded prior to the war weighed heavily on his mind.

Although the Archdeacon and his wife passed away at Sime Road internment camp in the last months prior to the Japanese surrender, their behaviour and conduct during the War reflected the couple’s devotion in serving others for the extension of the Lord regardless of one’s circumstances. While there may be a physical memorial at the Cathedral for Graham White in the form of a library, we can also learn about what it means to fight the good fight and to finish the race well (2 Timothy 4:7) from his service and sacrifices.