Getting to know our Bells

It was eight o’clock and night had claimed the island. Immediately after the gun sounded the curfew, the Revere bell at Singapore’s St Andrew’s Church rang steadily for a full five minutes. In 1843, this was the signal for sailors to return to their ships and for residents to be on their guard. The Revere bell was the church’s first bell.  Mrs Maria Revere Balestier, the wife of Joseph Balestier, Singapore’s first American Consul, gave the bell to St Andrew’s Church on the condition that it was used to keep Singapore residents safe. That was the beginning of St Andrew’s bell heritage and a testament of the role of the church in the city. 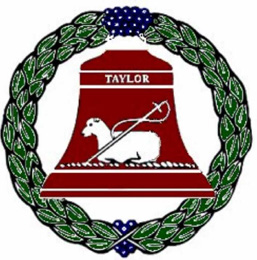 In 1889, in replacement of the Revere bell, St Andrew’s Cathedral received a peal of eight bells from the family of Captain J. S. H. Fraser, H.E.I.C.S. These bronze bells were cast at the John Taylor & Co. Foundry in Loughborough, England, the same bell foundry that cast the bells of St Paul’s Cathedral in London, England. These eight bells have been rung every Sunday for services, weddings, funerals, Easter and Christmas. They are the city’s call to worship and part of Singapore’s heritage in the civic district.

THE ANATOMY OF THE BELL
These eight bell apostles were made around the same period as the bells for St Paul’s Cathedral in London. St Andrew’s bells were made with roughly 80% copper and 20% tin, and cast with flat tops. The largest bell was 1,420kg and had a diameter of 1,337mm while the smallest bell was 227kg and 702mm in diameter. Each bell had a number and was named after an apostle – Andrew (the largest bell), Peter, Thomas, Bartholomew, Paul, John, James and Matthew (the smallest bell). Andrew, the largest bell, is about 500kg heavier than Peter, the next largest bell; but there is only a tone difference between them. 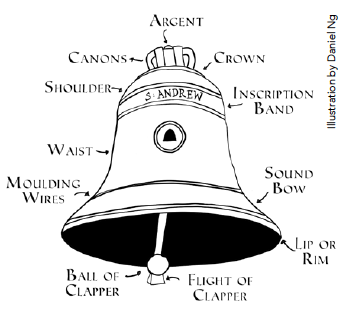 The year that the bell was cast is inscribed in Roman numerals (MDCCCLXXXVIII) and found just below the shoulder of the bell. Within this same band, the name of the bell is also inscribed. Just below the inscription band is the logo or trademark of Taylor Bell and Company, to reflect the foundry’s work.

The diameter of a bell affects the amount of application at a specific frequency of sound which means that a bell with a larger diameter will amplify the lower notes more. Each of the eight bells were cast with different weights, diameters and tones. The Andrew bell was a tenor and the Matthew bell was a treble, both pitched to E . Over time, as the bronze of the bell corroded due to moisture in the atmosphere, the heritage of the bells’ original tone was also altered. 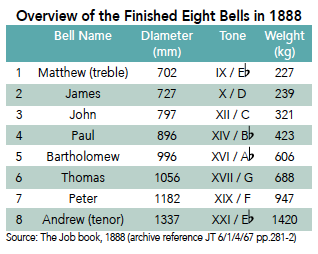 Bells can last 500 years if they are regularly maintained. Although the bells look strong, they are brittle and can be easily damaged if handled incorrectly. Bells crack if they are poorly made, for example when impurities or air bubbles remain in the bronze when the molten metal is poured. Structural fatigue due to wear and tear also weakens the bell. Hence, bells should be turned to avoid having the clapper strike on the same point in the bell. Bells can also damage if they are rung in an incorrect manner, such as not hitting the bell with the correct force to allow the clapper to retract fast enough and causing the reverberation and impact of the clapper to crack the bell. 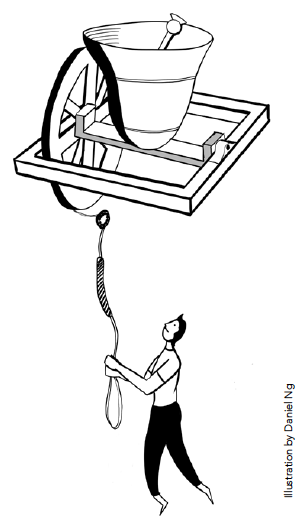 Bells designed for swinging are positioned mouth up when resting so that less physical effort is needed for bell ringers to swing them in a full circle. When the bells are converted for change ringing, instead of being hung dead, the bells will rest on a bell frame with wheels where the bell mouths face upwards. A rope will be attached to each of the wheels of the bells and the ropes are controlled by bell ringers in a chamber below the bells. When swung fully for change ringing, the bells may well be heard as far as Marina Bay Sands on a quiet day.

Change ringing refers to a method of ringing tuned bells by controlling the speed in which the bells are rung to produce variations in their striking sequences. Hence, the name ‘change ringing’ because bell ringing is performed by changing the pattern of ringing so that the sound produced is a constant cascade of notes. There are no tunes in change ringing. The bells in each ring are numbered, from the smallest bell which is the treble, to the largest bell, or the tenor. Change ringing is about making a series of swops. The number of changes that are possible depends on the number of bells.

To create a constant cascade of sound, bells are swung in sequence by making a series of changes in the order. In mathematics these are known as combinations, with the number of possible combinations being the factorial of the number of bells being rung. Hence, the more bells are used in change ringing, the more complex, and majestic, the sound of the ring, and the longer it would take to ring all the possible combinations (see Table on Number of Sequences). It takes roughly 2 seconds to ring one change because that is how long it will take a large bell to complete a natural swing. Of course, we do not need to ring all the possible combinations! The longest normal period of continuous ringing is a “peal,” lasting just over 3 hours. 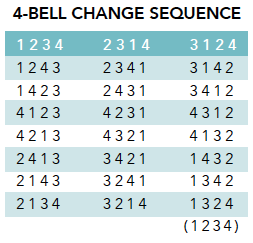 There is no score sheet for change ringing. Bell ringers are each assigned a bell and they learn the path that their bell makes through the sequence and memorise it. In change ringing, these swops follow a set of basic rules. For example, the rules of change ringing a 4-bell peal are that the sequence must start and end with 1234. Except for 1234 at the beginning and end, you are not allowed to repeat any sequence, and you must keep doing this until you run out of sequence. Also, the sequence must involve every bell and that bell’s striking position may only move one place at a time. With more bells, the sequences become more complicated and it takes longer to complete the sequence. This 4-bell sequence is also known as Plain Bob.

DISMANTLING THE BELLS AND EXTRACTING THEM FROM THE BELL TOWER
On 13 Nov 2018, bell engineer Mike Semken and bell hanger Andrew Mills visited St Andrew’s Cathedral to discuss how to dismantle and lower the bells to the ground. It was time for the bells to be taken down for a long overdue maintenance. Dismantling the bells was a historical milestone because this was the first time these eight bells would be taken down since they were installed 129 years ago. These bell experts explained their plan of action with the Preservation of Sites and Monuments Board which accepted their explanations and in turn gave suggestions on how to better access the bells in the future if they are needed to be moved again. 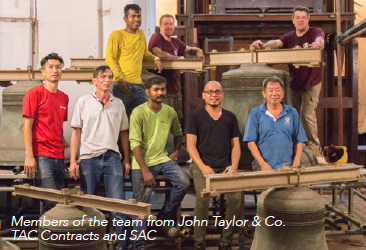 The eight bells rung for the last time on Sunday, 2 Dec 2018. Servers from the Cathedral Servers’ Guild rang out hymns between 1.30 to 2.00pm to bid a temporary farewell to the bells.

On 3 Dec, work began to make a space in a window in the north wall of the tower, through which the bells could be taken out. Then four strops of 2 tonne capacity were placed over the existing large section roof beams. The strops passed through the spaces between the floor joists that bear down on the main beams. Existing steel bell frames and beams in the bell loft were used as structural support to create the necessary mechanism to dismantle the bells. This way, there was no damage to the walls of the bell loft. The floor of the bell loft was cut to create an 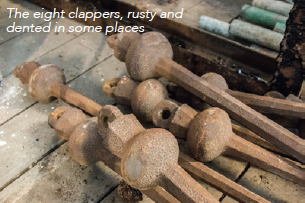 opening to move the bells from the bell loft down to the organ loft.

The clapper was first taken out from each bell. Then, each bell was lifted up out of the bell frame, and slowly maneuvered to the opening in the floor. Each bell was individually lowered down to the floor of the organ loft. The first bells that were dismantled and lowered were Bells 6 and 5 – Thomas and Bartholomew. Andrew came down last.

There was a respectful hush in the tower when Andrew, at almost 1.5 tonne was very, very slowly lowered down. It took a day to lower all the bells, but two more days were spent dismantling the frame from which the bells hung. 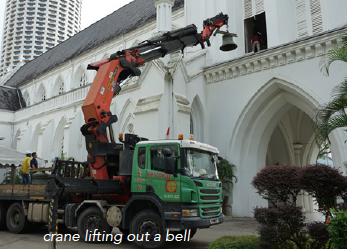 On 10 Dec, a crane mounted on a lorry, lifted each bell out of the eastern-most window in the north wall of the tower, directly on to the lorry. The bells, clappers, and some parts of the frame were to be put into a container and loaded on to a ship bound for Felixstowe and thereafter by rail to Loughborough. The cost of the whole project is $600,000, which includes restoring the present 8 bells, casting 5 new bells, adding a chiming apparatus, that will allow the bells to continue to be chimed electronically, shipping and logistics costs and the preparation of a bell ringing chamber.

On 28th June of this year, the new set of bells returned in majestic fashion, lined up on a trailer. Each of the bells bears the name of one of the apostles of Christ. The largest bell is the Andrew bell which weighs 1297 kg, while the smallest is the Simon bell which weighs 198.5 kg. The bells were placed in a tent for about two weeks, next to the Nave while the Bell tower was being prepared, including the installation of the mechanism to support change-ringing. Many members were able to see the bells up close for the first time. By the end of July, all the bells were installed.

On the 11th of August 2019, an organ pipes and Bells commissioning Service was held and Singapore got to hear change-ringing peals for the first time.