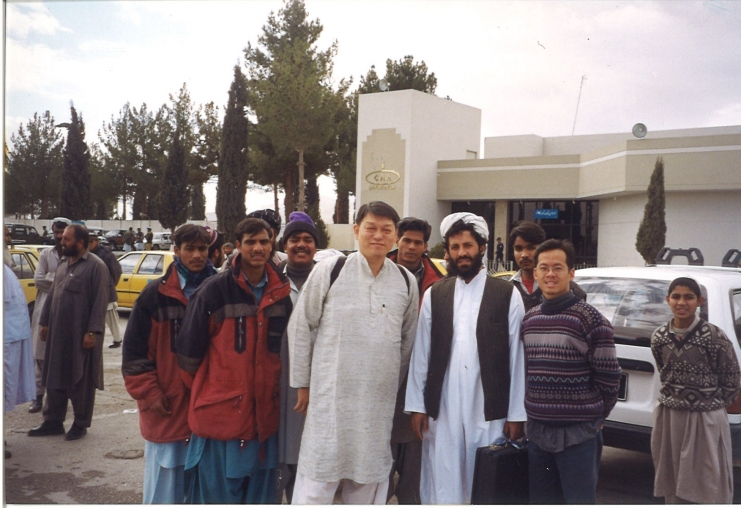 The late Teo Kong Guan, best known as Frank Teo to many; began serving the Lord in the St. Andrew’s Cathedral Youth Fellowship (YF), as a worship and study group leader. Even back then, he had the fire for sharing the gospel, bringing other youths into the fellowship and discipling them for Christ. After that, he joined the Young Adults Fellowship (YAF), where he became actively involved in the Cathedral’s outreach activities: street evangelism and church planting in parts of Singapore.

In 1983, Frank heard the Lord’s call for him to go into the overseas mission field. He left his engineering job and joined a missions agency, Operation Mobilisation (OM). There, he responded to the challenge to go where the gospel was much needed. Thus, Pakistan became his mission field.

During his time there, Frank travelled with the men’s team to distribute Gospel tracts and share the Good News in various towns and villages. On one occasion, the whole team was arrested by the police; but by God’s grace, released within hours. Shortly after that, Frank was involved in a vehicular accident which left him with serious physical injuries, and he had to return to Singapore to recuperate.

Frank returned to Pakistan upon recovery, and then worked extensively with Christian young men, grooming them to be leaders in the church today. Another significant role was as a cell group leader, teaching and sharing with those who wanted to know more about Christ.

After 10 years of ministry in Pakistan, Frank and his family returned to Singapore. He attended Bible College and remained actively involved in community outreach in various areas in Singapore. Later, Frank worked in the missions department of the Church of Our Saviour (COOS) where he helped to train new missionaries. During this time, his work in Pakistan did not stop. With help from COOS, and a Pakistani pastor, Frank started a church in Quetta, Pakistan.

Frank did not waver in his passion to see the lost saved. He continued to travel with local believers to share the Gospel in very remote villages. On one of these trips, he encountered an almost blind village headman. After sharing the Good News, the headman believed in Jesus and accepted Him as Lord, and he was healed of his blindness! This headman then shared with the villagers how he had seen the person of Christ in the very room where he was being prayed for.

Frank’s love for the Pakistani people was also evidenced in his efforts to raise funds for disaster relief work arising from the earthquake that struck Northern Pakistan in 2005. He persevered in enlightening as many in the Cathedral, and in other churches of the needs of the people in this troubled country.

Given his time and experience with Pakistan, Frank worked at training missionaries; this resulted in a good and lasting effect to the Cathedral’s missions work overseas.

Frank was serving on the staff of St Andrew’s Cathedral for two years before he was called home to the Lord. During that time, he worked with some Indian churches in Singapore to reach foreign workers with the love of Christ. This work took place regularly at the workers’ dormitories.

Even up till the end of his time in 2008, the Great Commission (Matthew 28:19-20) was utmost in Frank’s heart and mind. He laboured tirelessly for the salvation of the lost and walked every bit of the talk.

Contributed by: Frank’s wife, Mabel, and their sons, Aaron and Amos