We are heirs to the past, stewards of the present and trustees for the future.
- 1959 St Andrew’s Cathedral Stewardship Campaign Brochure

"The structure must be neat, convenient, commodious and elegant; such as would adorn the neighbourhood, and be suitable for that very admirable site which has already been allotted, and was long ago intended for the purpose." – Bishop Daniel Wilson’s 1834 address to the committee set up to build the first church.

Following the establishment of a British trading port settlement by Sir Stamford Raffles in January 1819, the population grew quickly along with trade and economic activity. There was also a need to therefore regulate certain matters. To this end, Sir StamfordRaffles appointed and instructed the colony’s engineer, Lieutenant Philip Jacksonto draw up reconstruction plans in 1822.

Land was demarcated in a grid pattern for different residential ethnic groups, trade and public activities. The Jackson Plan also included provisions for a church located in the heart of the civic district together with government buildings and European homes.

Initially, the Anglican community worshipped in a wooden and thatch-roofed mission chapel located where Raffles Hotel is today. It was Rev. Fred J. Darrah, Chaplain for the Mission Chapel, who desired a proper house of worship. Heconvened a meeting on Monday 6thOctober 1834 and sufficient funds were raised to start building a church on land allocated by Raffles ten years ago. Asubstantial portion of the initial funds was raised by the Scottish community. Hence, the church was named after Saint Andrew, one of the 12 Apostles of Christ andthepatron saint of Scotland.

Some have noted that the present Cathedral is not located “correctly”on the Jackson Plan. However, the Plan was never intended to be a definitive representation of actual land use or the church’s location. A more accurate depiction appears in the map based on a later land survey carried out by G. D. Coleman, the architect of the first St. Andrew’s Church. 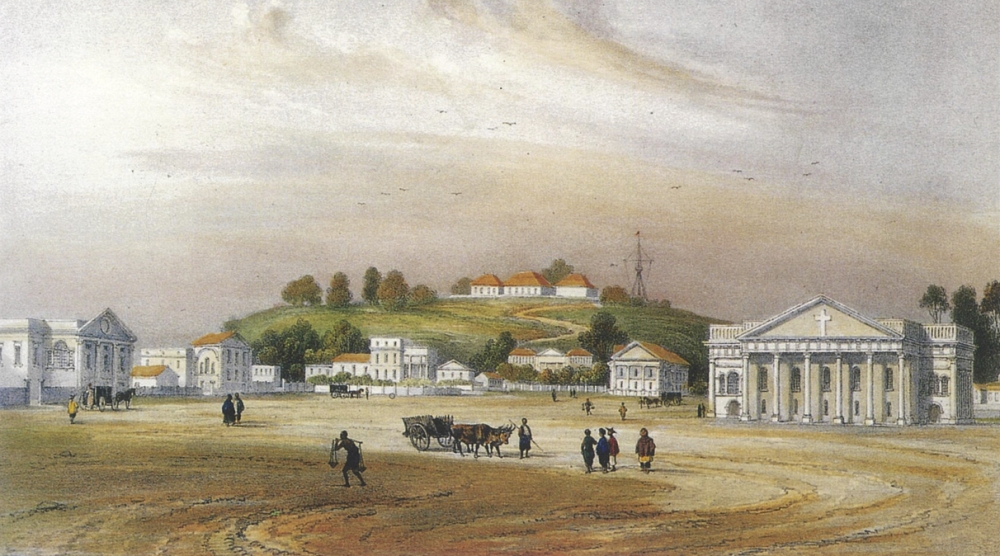 Painting of an early view of St Andrew’s Church from the seafront with Government Hill,
present-day Fort Canning in the background (National Archives of Singapore).

St Andrew’s Cathedral is the oldest Anglican site of worship in Singapore. While much is known about the Cathedral’s existing building, relatively little is known about the church building that came before, which had its first foundation stone laid on Monday 9th November1835.

St Andrew’s Church was fashioned in the Neo-Classical architectural style ofSingapore’s pioneer colonial architect G. D. Coleman, who was inspired by the symmetrical sensibilities of Classical Greek and Roman architecture. The church held its first service on 18 June 1837 and was consecrated a year later by the Right Revd Daniel Wilson, the Bishop of Calcutta who had jurisdiction over Singapore.

In 1842, a spire was to “distinguish the sacred edifice” from surrounding civic buildings. Unfortunately, the spire was struck twice by lightning in 1845 and 1849. While there were no injuries, church services discontinued from 1852 for safety reasons. In 1855, plans for the new church building were approved. 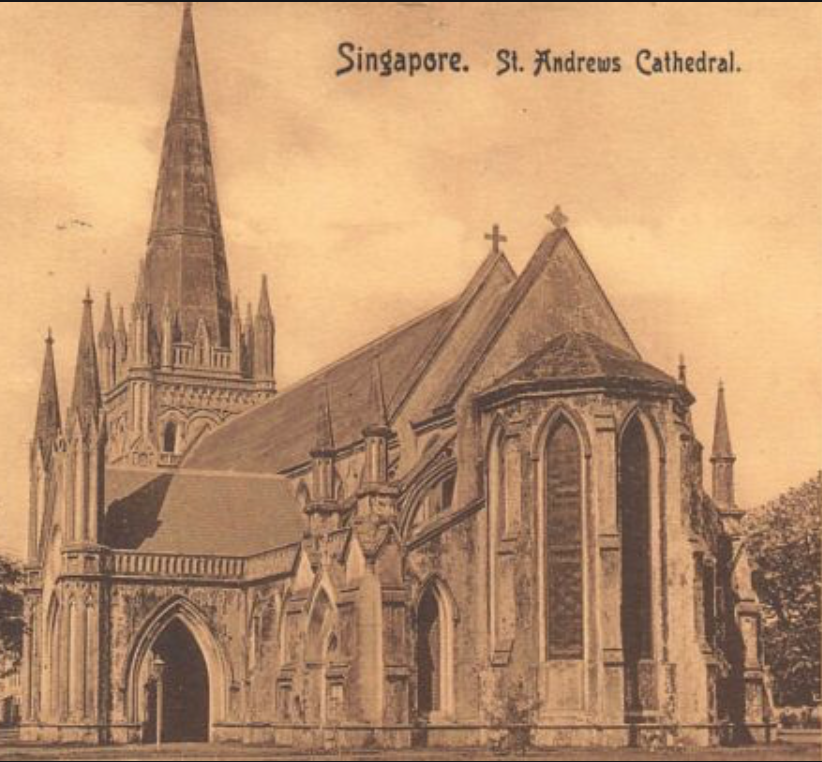 A 1919 picture of the existing building

The foundation stone for the Cathedral’s present building was laid in 1865. The first service was held on 1stOctober 1861,and consecrated in 1862. Designed by Colonel Ronald MacPherson in the neo-Gothic architectural style, the building accommodated around 300 seated worshippers. Its grand façade would have been particularly prominent from the sea then. For the Christian community in Singapore, it was a sign of unity and acted as a powerful stimulus for new missionary work in the region.

John F. A. McNair was appointed executive engineer,and superintendent of convicts in 1857. Fluent in Hindi, McNair had only one European assistant while the rest of his crew were convict labour from India. Babajee or Bawajee Rajaram from Bombay headed the team of draughtsmen. Another convict Appasamy as the foreman of the blacksmith’s shop did the ironwork. Boy convicts were trained to climb up to place imported slates on the new steeple.

Though it cannot be compared to the grand architectural projects in England around the same time, it is a unique building erected with limited funds. The newspapers then reported that the total cost of church building came to 47,916 Indian Rupees with the use of Indian convict labour. The use of convict labour for the building of a Cathedral is often a subject of comment. Many buildings in Singapore at that time were built in this way. 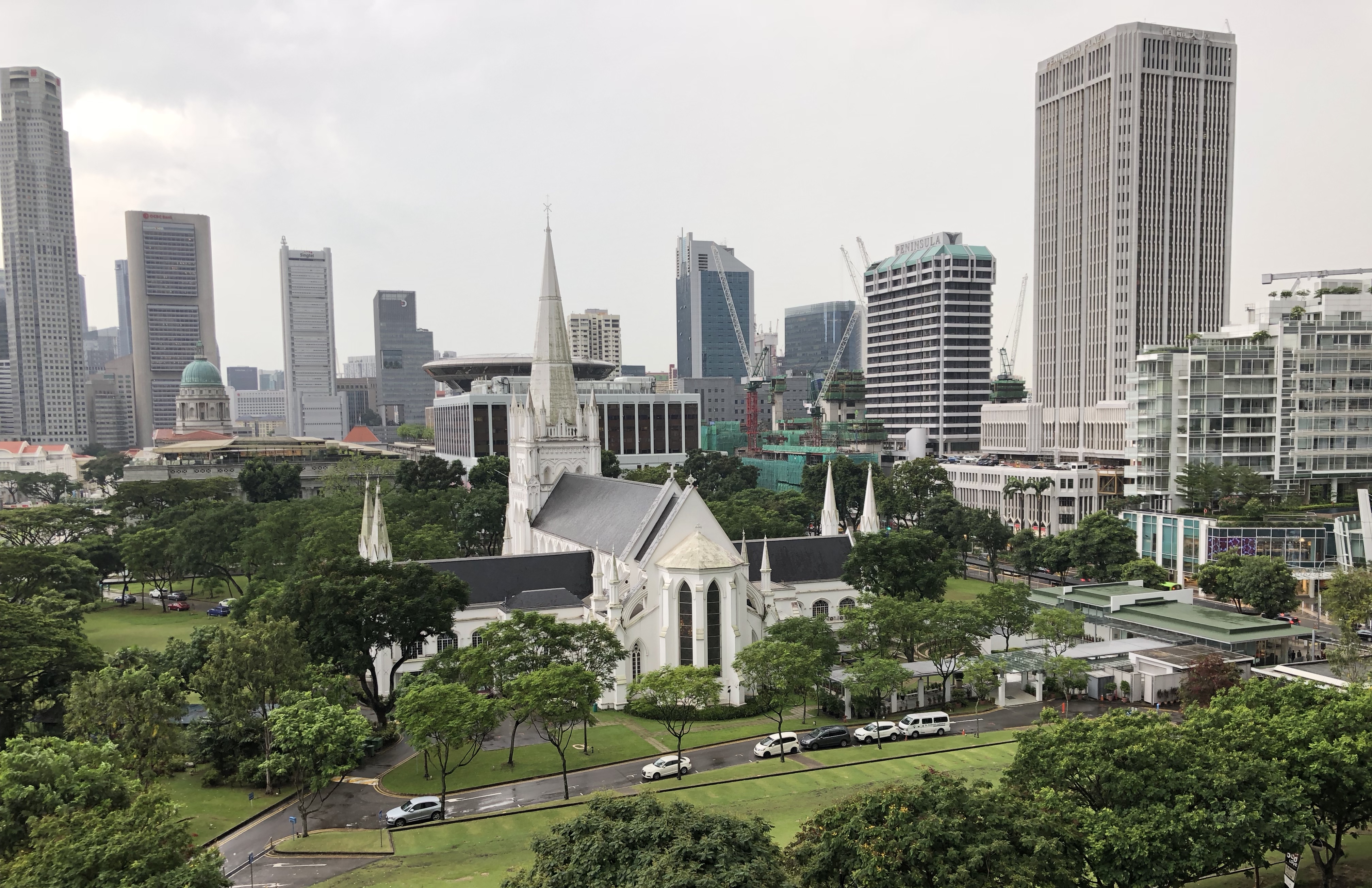 Unlike the earlier building, the present structure has lasted for more than 150 years,standing as a quiet witness to the generations of Christians that have come through its doors. It is an oasis in the heart of a bustling city state. The building consists of a nave with north and south aisles. The north and south transepts, originally built as porches for carriages, have in more recent years (North Transept -1952, South Transept - 1983) been extended to provide halls, meeting rooms and offices. 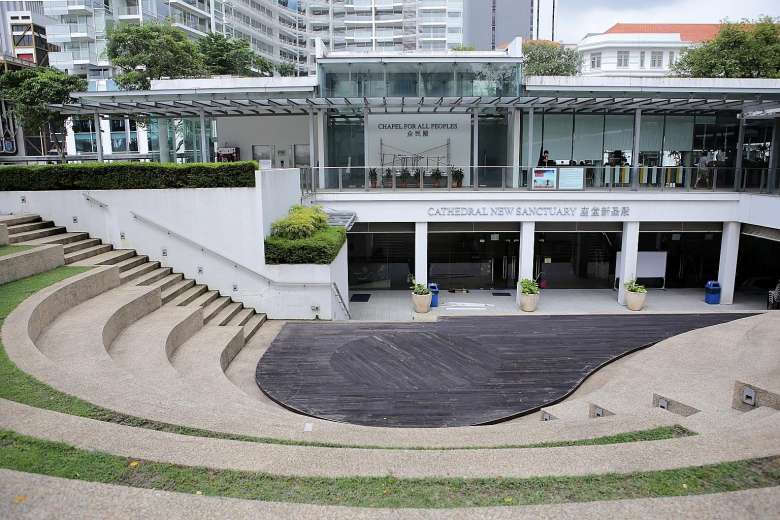 An ambitious extension project “Cathedral New Sanctuary” was started in November 2003. On street level, there is the Cathedral Cafe and The Chapel of All Peoples. Extending two storeys below street level is an underground worship hall. This extension was completed and consecrated in 2005 by Bishop John Chew.

Click here for a tour of the Cathedral building.

Revisit memories of our history as retold through in-depth first-hand accounts and more: