Refreshing the Sounds of the Cathedral

The Bells have returned! They rolled in majestically on a 40-foot trailer on the 28th of June. It was quite a sight to behold for those who were blessed to catch those moments. Last December, they were removed and shipped to John Taylor and Co. in Loughborough, where they were refurbished and five new bells were casted, bringing our set to 13.

Now that they are back, there seems to be an air of excitement. It seems that even those who wouldn’t consider themselves as enthusiasts are awed by the presence and sight of them up close. Various works are being done at, the bell tower and in one or two weeks time, they will be hung up. In due course, we will share more information about the bells and the bell-ringing ministry. It is likely that by early August, we will hear them ring again.

Meanwhile, we are grateful that the organ project is completed. Some may not realise that during a period from the 1970s to 2008, our organ was completely electronic. The pipes fell into disuse during this period. The project to restore the pipes, some which are more than a hundred years old, began in 2008. The first phase involved 400 over pipes. The second phase, which began in 2017, involved 600 over pipes. They have been refurbished and were installed last month. One set of pipes was placed at the South Vestry to accompany the choir. The other set of 12 wood pipes now stand on either side of the silver organ pipes at the West gallery. The pipes whether in the Vestry or the West Gallery, can be played from the same console without complications. The sound from this combination organ is now richer and fuller.

We are very grateful for both the Bells and Organ committees for their passion and hard work. In persevering and enhancing our rich heritage, we pray that the Lord will continue to be glorified in and through his Church.

We plan to commission the organ and the bells on the 11th of August at the 5 pm Service.

We are recruiting new members for the bell ringing ministry, which is headed by Benjamin Tai and Andrew Ang. If you are relatively fit and have a passion and call to be involved, please write in and tell us something about yourself and your interest to join us. Email: bellringingministry@cathedral.org.sg

2020 May
More from Courier Online 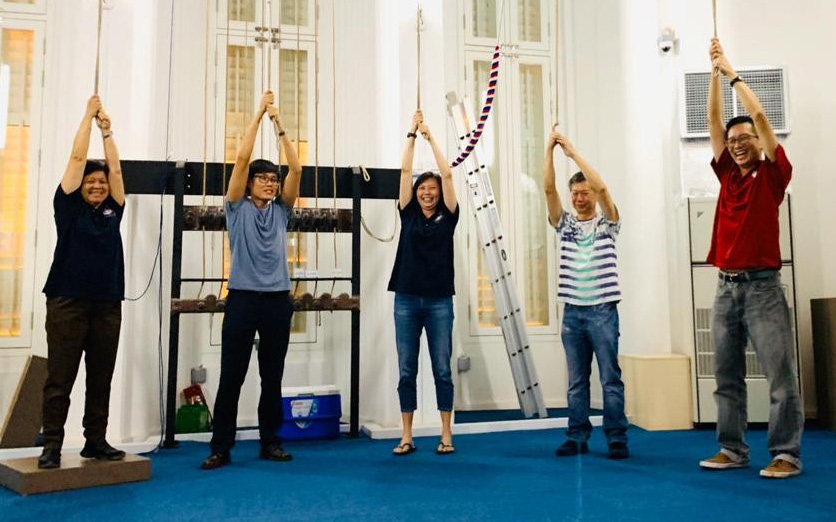