“We are heirs to the past, stewards of the present and trustees for the future.”
- from a 1959 SAC Stewardship Campaign brochure.

Towards the end of the Gospel of Matthew, we encounter one of the parables of Jesus which has a unique and forceful message. It focuses on the idea of potential. I am referring to the Parable of the Talents. The servants who were able to multiply the Master’s money were praised. The one who buried the money, fearing that it will be lost, was damned. Let’s hear it again:

"You wicked and slothful servant! You knew that I reap where I have not sown and gather where I scattered no seed? Then you ought to have invested my money with the bankers, and at my coming I should have received what was my own with interest.  So take the talent from him and give it to him who has the ten talents.  For to everyone who has will more be given, and he will have an abundance. But from the one who has not, even what he has will be taken away. And cast the worthless servant into the outer darkness. In that place there will be weeping and gnashing of teeth." Matthew 24:26-30

As you read Matthew 24, which also contains the Parable of the Ten Virgins and the Parable of the Sheep and Goats, the context becomes clearer. A parable, like all stories, has a point or a main message. It is not just teaching a business principle, i.e. if you don’t multiply your money, you are being irresponsible. In fact, this common principle, already practised in ancient societies, became an illustration for a wider message, which is found in verses 23 and 29:

"You have been faithful over a little; I will set you over much...For to everyone who has will more be given, and he will have an abundance. But from the one who has not, even what he has will be taken away.”

In context, it is obvious that this is an indictment against the Jewish religious leaders who stood against the teachings of Jesus and His flock. Those who have been "entrusted much" were having a gatekeeper mentality. They were “insufficient” for what God is doing (Virgins), they did not count as their own those who were persecuted and instead acted as perpetrators (Sheep and Goats) and they “safeguarded” their religious inheritance over and against the work of God which was “multiplying” His saving grace to be inclusive of Gentiles as well.

And when we really think about it, the message of this parable can be timeless and applicable across many cultures and epochs of time, in “time and space”, a phrase which I often use. We who have inherited a rich work of God from the past have a tendency to resist the new ways in which newer generations are being reached and blessed.

We are asked to be faithful with what He has given us. Some of us have much, others are given less. This includes authority as well. Faithfulness extends beyond gate-keeping and "keeping it safe." It is about being faithful to the task and call.

Think of what Singapore has become, two hundred years after Raffles landed. Think of the religious freedom we have here, and thus, the freedom to share the Gospel. Think of what we possess: good education, wealth, health, influence and so on. What are we doing with all these for the sake of His Kingdom?

And as a Cathedral family, we ponder on our strategic location, rich heritage, potential for Gospel influence, cross-cultural missions, Mother Church role and so on.

Will we bury what we have? Or will we multiply it? 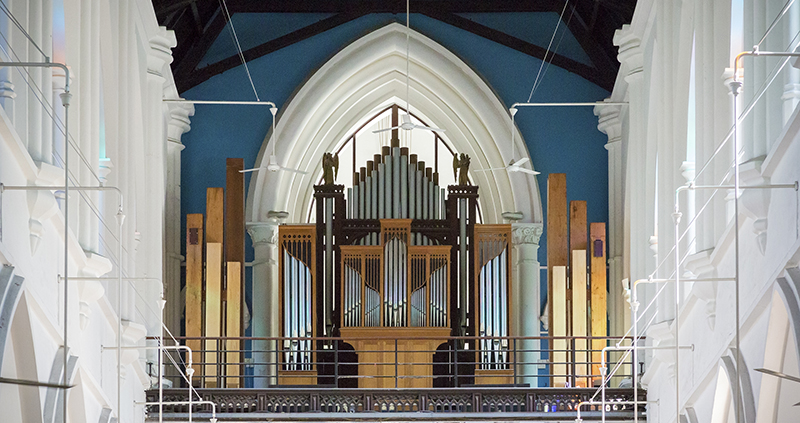 Old meets new in the tight space perched above the West entrance. Pipes of different ages and materials stand majestically, ready to proclaim God’s grace to the Cathedral. Discover the rich history of the organs and how the pipes were restored in this in-depth article.