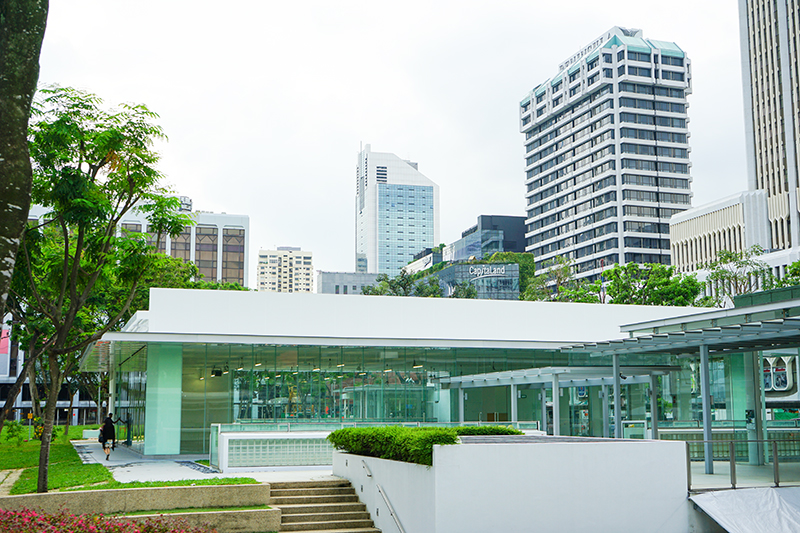 The Pavilion is almost completed. While her construction was relatively quick (6 months), it was an idea which was many years in the making. SAC had always faced a shortage of covered communal spaces. The temporary white tents did help to meet some of these needs. However, the tent was never meant to be a permanent solution.

Various ideas were proposed but they did not secure approvals from the authorities (i.e URA, PSM). About more than a year ago, the authorities advised us to explore a solution using the north lawn. We are grateful to Mr Chan Sui Him (a member of the Chinese congregation) and DP Architects for working on the concept and the authorities for their advice and support.

The project finally got underway with an end-November deadline in mind so that it can be ready to support the many Christmas-related activities in December. We look forward to using it soon.

Like a “Parish Hall,” this Pavilion will be set aside for multipurpose communal use. It will be naturally ventilated and the two sides of glass panels will be kept open. Though it has air-conditioned facilities, this will only be for occasional use and of course, the glass panels will need to be drawn.

We can expect an official blessing Service sometime in the first quarter of next year. Indeed we have much to be thankful for.

The current tented area also acts as a covered walkway,  ensuring that users of the Nave have cover from weather elements as they leave the Nave. These needs will not be met by the new Pavilion. We ask for your prayers as we discuss with the authorities in exploring a solution for covered walkways. Given the thousands who worship with us every Sunday and the needs of children and seniors, a practical solution will be needed.

We can look forward to some exciting events in the Advent and Christmas Season. Details are released in our bulletins and websites. We are still looking for volunteers to support the Myanmar Outreach on 8th Dec and the Filipino Outreach on 15th Dec. The Bicentennial Carol Services will be an amazing evening of choral and carol singing by some wonderful choirs. This year’s will be unique as we are also giving thanks for our nation as we celebrate our bicentennial. Information will be given soon on how you may attend if you wish to.

Each of us will also have an opportunity to participate in the Diocesan Give Him a Hundred Project in support of the work in our deaneries. Please give generously and you can be assured that every cent will be multiplied many times over for the work of the Gospel and Church in these countries.

We are blessed…that we may bless.

A few weeks ago, I was richly blessed through spending almost a week at a Benedictine community overseas. The solitude and silence of monastic life was healing on its own. I rode on the daily discipline of doing the offices with the monks. They do a daily seven and I was happy to join in for the Anglican duo.

St Benedict (6th century, Italy) and his monastic movement had been influential in English Christianity, of which we are beneficiaries. The three-fold Rule of Prayer (Regula): the daily office (Opus Dei), the private devotion and the community Eucharist was embedded in the life of the Church. It is both monastic and secular (as amongst laymen), found in both the East and West Church, common for all the various orders (Franciscan, Ignatian etc) and heavily shaped our Book of Common Prayer.

The Regula continues to shape the way we do church. Even in our contemporary Services, this three-fold order is found. Much more can be said but there is a lot of superficial or selective understanding of the Church (and Anglicanism), of which one remedy is good systematic education so that our ideas of the Church are properly shaped. Here in the Cathedral, we need to plough the depths of our Church heritage and this is one area which we will continue to give priority to. Orthodoxy is shaped by both our beliefs and our worship. In fact, both are integral: a creedal faith shaped “in Regula.”

Coming back to the monastery, every mealtime was “luxurious.” By that, I am referring to Scripture and other readings being read as we went through simple but delicious soups and mains, served to the table. It was a feast for all the senses.

The cottage I stayed in was right in the middle of a wheat field. It was pitch dark at night accompanied by a deafening silence, broken occasionally by rabbits scurrying around or howling winds. Almost every night, the Southern Cross, Mars and the Orion Belt can be traced if one chooses to.

It is one of those things which I wish I had done earlier. Busy and distracting modern city life can be destructive spiritually and humanly. We do need to pull away occasionally. Even Jesus will go away into the desert or find quiet in the early hours of the morning. I don’t think we can afford to do less.
Though alone, I was accompanied by some saints, mostly "absent brethren” in the likes of Meister Eckhart, Henri Nouwen and St Benedict. I was also blessed by catching up on a book on English Spirituality (from which I drew my above sharing about the regula). It’s Anglicanism from the angle of the development of her ascetically and spiritual beliefs and practices. And of course, I had lots of Bible time: reading, being read to and meditating.

Without a doubt, this break is not something some of you can do easily given your work commitments or the costs of overseas travel. As I shared in the bulletin two weeks ago, we need to imagine a “place” here where this can be our regular experience. Join me in praying for a Church that is digging deep in her heritage.

For I received from the Lord what I also delivered to you, that the Lord Jesus on the night when he was betrayed took bread, and when he had given thanks, he broke it, and said, “This is my body, which is for you. Do this in remembrance of me. In the same way also he took the cup, after supper, saying, “This cup is the new covenant in my blood. Do this, as often as you drink it, in remembrance of me.” For as often as you eat this bread and drink the cup, you proclaim the Lord's death until he comes. 1 Cor 11:24-26

For some of our Services, the Holy Communion is a weekly experience. Others have it fortnightly. Why do we celebrate the Communion at all?

For a start, this is a tradition handed down to us. Paying attention to the words of Scripture, St Paul said, "For I received from the Lord what I also delivered to you…” (v 23). And He went on to speak of an event, not just a teaching. It was one where on the night our Lord Jesus was betrayed, he took bread and broke it, he took the cup and drank it, saying this bread is my body for you, this cup is the new covenant in my blood, do this in remembrance of me.” That for the disciples later, this act, indolent with his cross-sacrifice, was obvious.

What was Paul’s specific instruction? The phrase “Do this in remembrance of me” can be translated “Do or make this as my memorial.” We are not just given something to say. We are not given form of words. We are given an action, something to do or perform. And as we do so, we continue to proclaim the Lord’s death until He comes. In this “in-between times”, we continue what was handed down to us from the apostles.

However, this Christian tradition is much more than just a past memory or pious nostalgia. The word remember, or anamnesis, is significant.

Research into the Old Testament way of understanding God’s works in the past as the Jews celebrate them in the present through rituals can be helpful. In this respect, the continuing Jewish celebration of the Passover meal is an example. Anamnesis is an "objective memorial” where, as one celebrates the past, God’s saving acts continue to be effective in the present. The benefits of his death and resurrection are received and experienced in the here and now by faith with thanksgiving; yet, the historical event remains "once for all" and never repeated. This is made abundantly clear in Scriptures (see Romans 6:9-10, Heb 9:25-28). It is not a repeated death; Jesus is not re-sacrificed.

Yet, it is not just a psychological recall either. The unanimous tradition of the Church (in the east and west) in the first millennial testify to this: it is an active memorial, where we appropriate for ourselves what Christ had given to us in the past, and is still giving. In this sense, he is the true celebrant at every communion. It is something enlivened by the Spirit as we meet as his people and gather in His Name. We are united with him and enter into the mysteries of His death and resurrection. We centre our lives on it. In so doing, we also offer our own lives for His Service, remembering that at the heart of the Christian faith is self-sacrifice.

Instead, at every Communion, let’s re-centre our lives on the heart of what Christ had timelessly done for us: His saving act for our holy reconciliation and our future hope for a wholly reconciliation.